From MIR4 Wiki
This article is a stub. You can help the MIR4 Wiki by expanding it.

Resources are a way to measure wealth in MIR4. There are multiple types of resources, also known as currencies, in the game. The three resources used for the store are copper, mileage and gold. Other resources like energy or darksteel are used for crafting or enhancement. 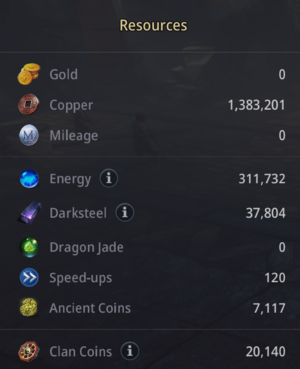 Screenshot of the resource overview

Most common currency. Received from missions, tasks or selling items. Can be used to buy items from vendors, summoning items, bag expansions etc.

Necessary for Enhancing and Enchanting, as well as Crafting.

Obtained by meditating at an energy pulse node. Used for training Inner Force (and more).

Obtained by mining in Bicheon Valley, Snake Pit Valley or special areas like Secret Peak or Magic Square. Necessary for enhancing and enchanting, as well as Crafting. Also used to smelt into DRACO.

Can be purchased through the cash shop. Used to upgrade clan techniques when the cooperation count is exhausted.

Can be used to speed up unsealing or conquest promotions. Obtained through the cash shop or Speed-up tickets.

Obtained by farming at Magic Square and Secret Peak. It is also a reward for completing Raids. Can be used in the spacetime shop.

Received by fulfilling clan activities. Can be spent inside the Clan Shop.

While this is not a traditional resource, it will be counted as such here. Experience is obtained by hunting monsters and completing missions or raids.

Retrieved from "https://www.mir4.wiki/index.php?title=Resource&oldid=777"
Category:
Cookies help us deliver our services. By using our services, you agree to our use of cookies.